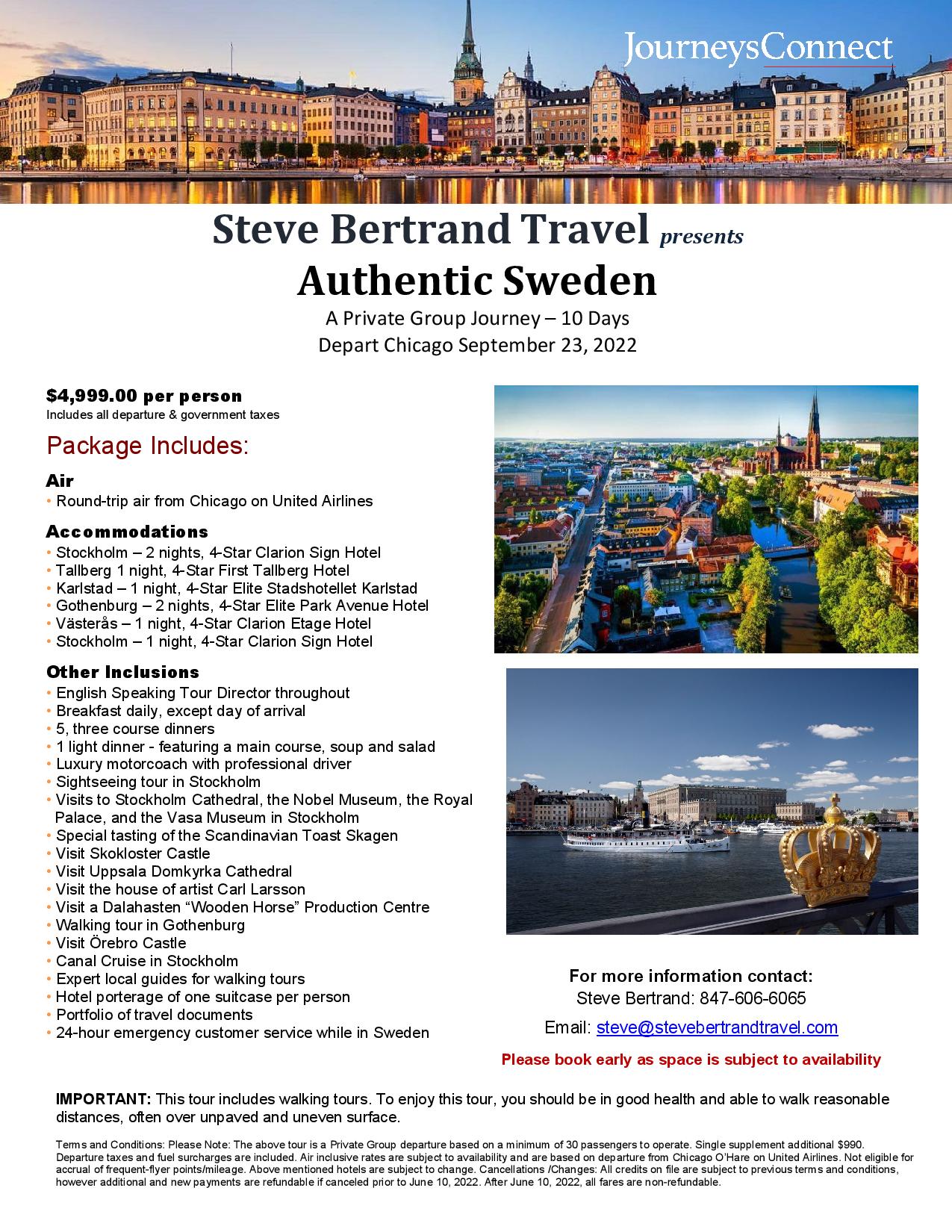 DAY 1 USA / STOCKHOLM: Fly transatlantic overnight from the USA to Stockholm, Sweden. Dinner is served, and in-flight entertainment is provided.

DAY 2 STOCKHOLM: Upon arrival in Stockholm, you meet with your Tour Director and shortly afterwards transfer to your hotel in the city center. The rest of your day is free to explore the Swedish capital. Stockholm is generally referred to as Beauty on Water, or Venice of the North, which is understandable, as the city is built upon 14 islands. It is surrounded by the Lake Mälaren, and by the Baltic Sea. City’s grand public buildings, palaces, rich cultural history and museums tell her history from 1252. Later this evening, enjoy a welcome dinner in your hotel. (D)

DAY 3 DISCOVER STOCKHOLM: Enjoy breakfast in your hotel. During your sightseeing tour you will visit the Gamla Stan (Old town), where you will be charmed by cobblestone streets, crooked but beautifully preserved buildings, gothic churches and excellent cafés, bars, restaurants and Swedish design-ware shops, the famous Stockholm Cathedral and the Nobel Museum. The Royal Palace is one of the largest palaces in the world with over 600 rooms. In front of the palace you can see the parade of the soldiers and changing guards daily. Visit the Vasa Museum – located on the island of Djurgården- a maritime museum displaying a ship of the famous king Vasa, which sunk after sailing only 1300m. Later this afternoon, enjoy a special tasting of the Scandinavian Toast Skagen. Your evening is free in Stockholm. (B)

DAY 4 STOCKHOLM / SKOKLOTER / UPPSALA / TALLBERG: After breakfast, depart from Stockholm and begin your journey to Uppsala, a prominent university town in which Uppsala Domkyrka Cathedral stands. On the way, visit the visit Skokloster Castle. Skokloster is considered one of the great Baroque castles of Europe. Built between 1654 and 1676 for Count Carl Gustaf Wrangel it is a monument to the Swedish Age of Greatness, the period in the middle of the seventeenth Century when Sweden expanded. Uppsala, one of Sweden’s oldest cities, is world renowned for its universities, its magnificent cathedral and the legacy of Carl Linnaeus, among other things. The new Uppsala similarly became an important trading center, but also a city of learning, when the first university in Scandinavia, Uppsala University, was founded in 1477. World famous scientists such as Carl Linnaeus, Anders Celsius and Olof Rudbeck the elder carried out their work here. Visit the places where artists and kings lived and worked, take a stroll in the straight streets that are characteristic for the city and admire the combination of history & modernity. Visit Uppsala Cathedral, the largest and tallest cathedral and one of the most impressive religious buildings in Scandinavia. Originally built in the 13th century under Roman Catholicism and used for coronations of the Swedish monarch, since the Protestant Reformation it has been controlled by the Lutheran Church of Sweden. It is the seat of the Archbishop of Uppsala, the primate of Sweden. Continue your way to Dalarna, “the most Swedish of the regions” because of its huge forests and red wooden cottages. After crossing the city of Avesta, discover the national symbol of Sweden, the Dalahasten (the famous wooden horse). Then go through the picturesque village of Sundborn where you pause to visit the house of artist Carl Larsson who is representative of Swedish interior decoration. Continue to Tallberg for dinner and overnight. (B/D)

DAY 5 PASSAGE THROUGH LAKE SILJAN / KARLSTAD: This morning, head towards the surrounding area around Lake Siljan which is known to have a beautiful blue color. Start your day with Rättvik, then Nusnäs, where you visit the production centre of the Dalahasten, the children’s toy that has become the national symbol of Sweden. Continue to Mora, which is the birthplace of the painter Ander Zorn. Here you pause to visit his house, connected to the museum with an incredible collection of his works. Continue towards Karlstad via the lush forest trails of Dalarna. On your way you will come across the town of Malung in the Värmland region which is crossed by the Klarälven river. Also visit Mårbacka and the home of Swedish author Selma Lagerlöf, who was the first woman to win the Nobel Prize for Literature in 1909. On to Karlstad for dinner and overnight. (B/D)

DAY 6 THE SWEDISH COAST: After breakfast, depart and continue to the west coast of Sweden, Bohuslän, which consists of sloping cliffs and more than 8000 islands. Visit Tanumshede stone engravings from the Bronze Age (1800 BC). Onward to the coast and visit the many villages such as the very charming Lysekil. In the afternoon, arrival in Gothenburg, second largest city of Sweden. Enjoy the many restaurants and tourist attractions that the city has to offer. Masthuggskyrkan, the church is a well-known sea navigation landmark in Gothenburg by providing a spectacular view of the city and the harbor. Enjoy dinner in your hotel. (B/D)

DAY 7 GOTHENBURG: After breakfast, visit Gothenburg Botanical Gardens, one of the largest Botanic gardens in Europe, an impressive collection of plants and flowers in Gothenburg. Your afternoon and evening are free in Gothenburg. Do not miss a visit to the “Fish church” the famous indoor fish market hall from 1874, it is known as the Mecca for seafood lovers. (B)

DAY 8 ON THE SHORES OF LAKE VÄTTERN: Following breakfast, enjoy a walking tour through the city along the famous Avenyn Avenue, Gothenburg’s main street. Then continue your journey through Lake Vättern and the city of Jönköping. Stop by Gränna, which is famous for producing “Polkagrisar”, a solid candy traditionally made with peppermint, but which can be found today in many different flavors. Enjoy some free time in Gränna before continuing along the east coast of Lake Vadstena and on to visit Örebro Castle, romantic and surrounded by moats covered with water lilies. Continue to Västerås for dinner and overnight. (B/Light Dinner)

DAY 9 VASTERAS / STOCKHOLM: After breakfast, take a walk through the charming historic center of Västerås. Then depart and make your way back to Stockholm. On arrival, enjoy a canal cruise in Stockholm, and the beautiful views of the city from its waters. The remainder of your day is free in Stockholm. Later, enjoy dinner in your hotel. (B/D)

DAY 10: STOCKHOLM / USA: After breakfast, transfer to Stockholm airport for your flight back to the US. (B)

IMPORTANT: This tour includes walking tours. To enjoy this tour, you should be in good health and able to walk reasonable distances, often over unpaved and uneven surface.

This is a Private Group Journey based on a minimum of 30 participants to operate. Rates are per person based on double occupancy. Departure taxes and fuel surcharges are included. Single supplement is additional $990. Air inclusive rates are subject to availability and are based on departure from Chicago on United Airlines. Rate includes round-trip economy class airfare, including carrier and government-imposed taxes and fees, and the September 11th Security Fee of $5.60 per enplanement originating at a U.S. airport. Fluctuations in exchange rates may affect some taxes or fees. Child/infant discounts are not available, and stopovers are not permitted. Baggage fees may apply; please check with carrier for specific policies. Not eligible for accrual of frequent flyer points/mileage. Above mentioned hotels are subject to change. Cancellations/Changes: All credits on file are subject to previous terms and conditions, however additional and new payments are refundable if canceled prior to June 10, 2022. After Final payment date, June 10, 2022, payments are non-refundable. Trip protection is recommended. The applicable Travel Protection Plan will be applied to your purchase. Additional details will be provided on your Itinerary and Travel Protection Plan Voucher travel documents upon purchase. For travelers on offered Escorted Vacations, Golf, or Cruise Vacations, travel protection is provided by Trip Mate Inc. This coverage is designed to protect your travel investment with a full cash refund less the cost of the insurance and cancellation fees for the following covered reasons such as death, sickness, injury or certain other covered reasons. Full description of coverage can be found by visiting http://tripmate.com/wpF421S. The cost of this protection is 9% of the total cost of your trip and must be purchased at time of booking. All claims are to be made to Trip Mate Inc. 1-800-888-7292 or 9225 Ward Parkway, Suite 200, Kansas City, Missouri 64114 Plan #: F421S